I’ve never been a fan of any sort of animal print. So you ask, then why do you have a leopard print robe?  The answer is a very short story. The purple robe died. I wear my clothes and shoes in the same way I drive my car, until it leaves my possession on a tow truck or in the case of the purple robe, until every seam was coming apart. The horrible thing of which was the subject of nearly all family members and friends as a way to tease me (you’re welcome) was covered in coffee stains, worn down to the mesh below the fabric like high traffic carpet. Upon the death of the thing that had kept me warm for nearly seven years I realized it was only fair to make a social media post announcing it had seen its last day. Besides, that gave everyone an opportunity to have time to find something else to make fun of me for! Now though, being a personal advocate of avoiding all things new especially clothing- I’ll get to why in just a few, I simply went without a robe hoping to find one in a thrift shop before winter really set in. Little did I know that I would not go for long before being once again joyfully wrapped in a long soft load of fabric with deep enough pockets to carry my smart phone, ink pens, garden tools and even an entire can of goldfish food for my morning adventures to the pond. Less than a week after the whole incident I came home to find a package on my porch. From Florida. Which meant it was from my mom. Inside was stuffed the softest, fluffiest winter robe I could ever wish for. It was brand new, and it was leopard print. The note on top explained, “Saw your post about your purple robe so I bought you a new one. You won’t get any coffee stains on this one!”  She was correct, I certainly would not.

Several months later a neighbor came calling one evening. I was cooking dinner happily buzzing about the kitchen in yes, the leopard print robe. When I heard the knock on the door I yelled out to come in. She looked shocked when she saw me and giggled. At first I was sure that this was because everyone knows how much I detest cooking and I was sure she figured I had drank the wine before putting it in the stew. However, it was the robe. She exclaimed that she had no idea that I secretly liked wearing animal print. So I told her the story. 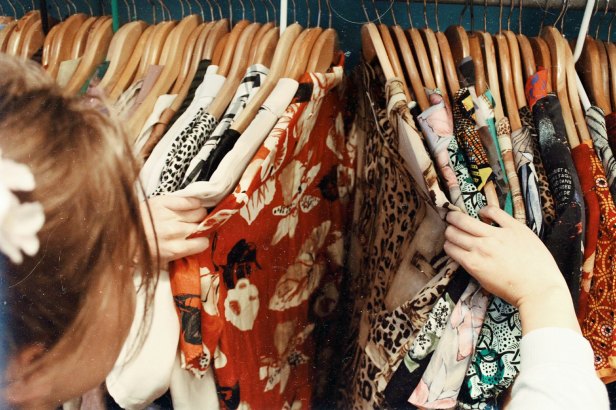 According to the makers of the documentary The True Cost, 97% of our clothes are made overseas, many working in conditions that violate human rights (85% of workers are woman) and most are of the lowest of paid workers in the entire world. On top of that there are the negative environmental impacts (also available on their website) such as:

Cotton production: Uses 25% of worldwide insecticide use, 18% of worldwide pesticide use and because most cotton is grown from genetically modified seeds, farmers who previously saved seed for the next year’s crops are often unable to afford buying new gmo seed and the necessary chemicals and insecticides to grow them each year. This has been part of the cause of over 270,000 farmers in India having had committed suicide between 1995 and May of 2014. [1]

High cheap fashion = more clothes in the landfill:  Americans toss eleven million tons of clothing away each year with the average American responsible for around 82 pounds of that waste each. Worldwide, humans are purchasing 400% more clothing than just twenty years ago at a shocking 80 billion clothing items per year.

Water: The process of creating clothing includes using upwards of 8000 different chemicals which are directly responsible for 20% of the world’s water pollution.[2]  1,800 gallons of water are used to grow enough cotton for a pair of jeans, 400 for a t-shirt and 101 gallons for a pound of wool.[3]

You’ll have to watch the documentary for the rest of the harsh realities of our clothing obsessed consumerism. Anyhow, you get the point. There’s essentially nothing good about the industry of making new clothes.  Therefore, outside of underclothing and shoes, for the past 3 years I have fairly successfully purchased almost all of my clothes used. Of those I purchase new I buy environmentally/fair labor brands when I can afford to or otherwise simply buy less. I don’t need three pairs of sandals, one will do.

After I finished explaining all the above to my bewildered neighbor she determined that the reason I wore the robe was to honor the poor woman that made it. “YES! THAT’S IT EXACTLY!” It was made, it was purchased, and now it was in my possession. The only right thing to do was to think of her each time I put it on. It actually creates an incredible perspective when you take a second to reflect that everything you own was created by someone, came from something on earth be it cotton or water, and likely added a little harm to our planet. This is not a quest of guilt or sadness, simply a quest of gratitude for what we have and consciousness of how we got it. It also helps curb the compulsive buying that our daily bombardment of psychologically focused advertising tends to get even the most conscious of us all.

This story ends in hopes you are inspired and smiling. As for the leopard print robe, I think it has at least a good four more years in it, I should probably start looking for the thrift shop backup now.

Living Life Outside the Box